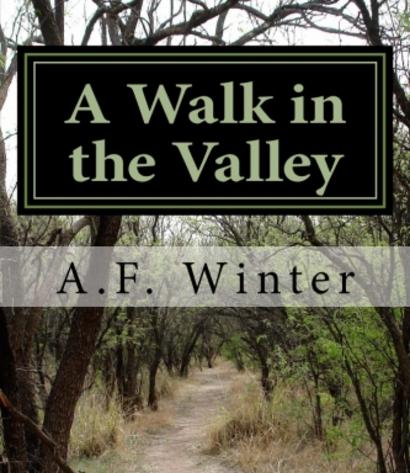 A Walk in the Valley

What would happen if the Messiah came in our time?  He would probably be beheaded and

the video would go viral on YouTube.   And we would all breathe a sigh of relief because we

could go back to our evil, selfish ways, putting off introspection for another time.  How would

the Messiah even compete with twerking, the political circus, and preachers spouting hatred

to fill their collection plates?

we are ready.  I don’t believe he would be an angel.  He would be a regular person.

A Walk in the Valley is the story of the evolution of one of these people.

John B. is a homeless alcoholic whose downfall began with the death of his wife.  We would regularly avoid this type of person, if we saw him on the street, if we noticed him at all. He begins to see visions.  But the visions are not of heavenly figures; they are of ghosts.  At first he denies their existence but soon realizes that even in his downtrodden state, he could still help a being in pain. This starts his incredible journey.

A Walk in the Valley is not a religious work. It does connect religious beliefs from many cultures but does not favor any single one.  It is part ghost story, part detective novel, and part social commentary.  The final part of the book is a gospel of this man who tried to heal the world.